Memories of Home, Flight and Expulsion in German Post-war Newsreel 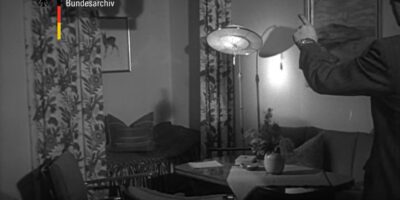 Representation of Placement and Displacement in East and
West German newsreels

During the post-war era not all refugees escaped from East to West – some changed the direction. The East German newsreel reported on these people and their ‘good life in Socialism’ – in contrast, working conditions in West Germany were displayed as exploitative. Whereas the West German newsreels showed a high standard of living in the era of 1950s ‘Wirtschaftswunder’ – in contrast, the life in GDR was depicted as poor and dreadful.

After WWII, the Allies brought their own newsreels to German cinemas – using them for reeducational matters. After the Western Allies’ withdrawal from newsreel production in West Germany, the newsreels were produced solely under German management. In East Germany only one newsreel existed as mouthpiece of the central party SED.

Due to the different political and economic orientation, the tonality of reports of course differed greatly in the East and West newsreels. Despite this, in 1954 the responsible parties signed a contract for the regular exchange of stories. This way, the newsreel films were mutually used for propagandistic matters.

From my current project on the relation between East and West German newsreel, I would like to give the outlines of depicting refugees and their ‘homes’ through the conception of reports.

Pictures of refugees camps (see fig. NDW No. 215) were used by both – as a place for transition from one life, which they remember as home, and another – better – life in one of the both states. In West German newsreel, refugees were mostly shown with a handcart, a rucksack, a wooden suitcase, all crammed full with their entire belongings. The East German newsreel Der Augenzeuge used pictures from West German Newsreels for highlighting the refugees’ and expellees’ miserable life in the transit camps. Followed by a report on peoples’ success in the socialist system of the GDR. With this subliminal comparison, the Government of the western part, the FRG, was portrayed in bad light. The reasons for the flight of most people – the poor supply of everyday goods and the need of free travelling – were never mentioned.

I agree with the approach of ‘Visual History’ (Gerhard Paul): Images are historical sources. But, when it comes to privation of post-war time, we see the newsreel pictures in todays’ TV documentaries again – but partly fictionalized in conjunction with re-enactments. Then as is now, social memory is shaped by images – but the medial context is crucial.