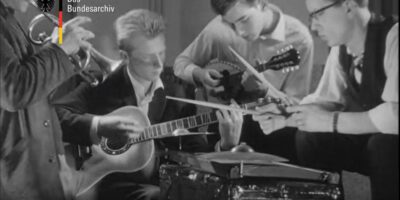 Jazz between Politics and Modernity

Fashion and Beauty in German Wirtschaftswunder

Before television was enforced, newsreels were the only way to convey cultural news and fashion ideas to a wide audience through moving images. However, it is unknown how these media shaped the image of fashion in all its facets: e.g. designers (Oestergaard, Schulze-Varell), styles (A-Linie, Pfeil-Linie), new synthetic material (Perlon, Nylon in West (FRG) and Dederon in East (GDR)), and international competition. In the 1950s fashion and beauty queens (e.g. First Miss Germany Susanne Ehrichsen in 1950) became ambassadors for West-Germany. The ‘Wirtschaftswunder’ and rising wages in West-Germany made fashion and beauty products affordable again.

Especially through international fairs, fashion made from synthetic fibre gained importance. Neue Deutsche Wochenschau  in May 1960 reported on a contest of thirty famous European fashion designers. One can recognise principles of newsreel design which were recommended by the head of newsreel department of the film company UFA back in 1939. The music, the camera perspectives and motifs are remarkable and also the trick that the cinematographer used: he pulled Nylon-strings at dresses for letting them invisibly move.

Outlining the variety of fashion reports in German newsreels it is to focus on:

Through the newsreel reports, the changes in fashion and the extended requirements on standard of living in times of the economic resurgence are remarkable. But what about the East of Germany, where a totally different economic system was established. How did the newsreel in the GDR report on fashion? As sources, Neue Deutsche Wochenschau (as a West-German newsreel production) and Der Augenzeuge (as the newsreel production in the GDR) are used. Besides, it is to quote from contemporary reviews and articles in order to embed the visual sources in their cultural historical discourse.

As research approaches I am referring on the methods you see on this website.

The topic was presented at the conference „Sewing Reality“ at University of Bedfordshire in Luton, UK, 9 June 2018.
Leave a reply – make a comment!

Jazz between Politics and Modernity